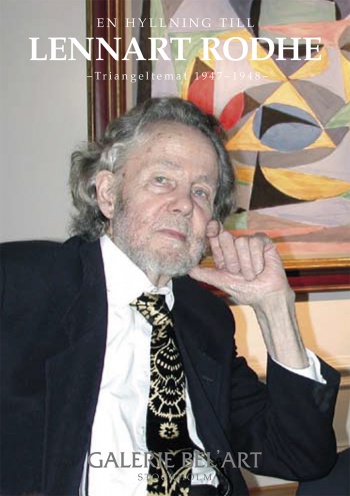 Lennart Rodhe was born in 1916 in Stockholm. Following studies 1934–1936 at Edward Berggren’s teaching studio, he applied to the College of Art in Stockholm, but was refused. His decision to transfer to Copenhagen to begin, instead, at Rostrup Boyesen’s School of Art proved a highly successful move. To begin, the artistic climate of the Danish capital was much more open. Also, Rostrup Boyesen was a teacher as strict as he was generous, and he encouraged experiment. In 1938 Rodhe did in fact gain admission to the College of Art in Stockholm, but found no joy in it and returned to Copenhagen. The German occupation forced him to return to the college of Art in Stockholm in 1940. His final year at the school, 1943/44, was important since it was in that year that Sven Erixson, began to teach.

Lennart Rodhe’s Declaration of Independence as an artist was the series of paintings he produced in the spring of 1944. As often with Rodhe, he tried to reproduce the rhythm of nature, rather than attempting any likeness in the outward sense. After the war there was a longing in radical artistic and cultural circles for the new style of visual art, Modernism, which so suited the spirit of the age. Lennart Rodhe and several of his colleagues, such as Lage Lindell, Pierre Olofsson, Karl Axel Pehrson and Olle Bonnier, were soon attracting attention. In 1947 they took part in a collective exhibition at färg och form gallery in Stockholm. Lennart Rodhe had found a new theme, his triangles. This find he made on his trip to Paris in 1947, in the autumn. He was inspired by the African collections in the city’s ethnographical museum. There he found patterns created by triangles, Rodhe was concered to create a dynamic rhythmic surface. On his next trip to Paris, in 1949, Rodhe met central figures of that time, Ethiennne Béothy, he was enabled to visit both Auguste Herbin and Alberto Magnelli.

From Paris, he continued his journey to Switzerland, not only to study but to admired Paul Klee, but also visits Max Bill and Richard Paul Lhose. In around 1947-1948 people began to speak of Concretism, after the art concret of the twenties, but Rodhe never took part in any form of manifesto and the line he takes has always been unorthodox. Rodhe worked with triangles for five years, to tame them, and lead them the way he wanted. In the late winter of 1950 he took a break; he travelled to Spain, New York and then to Morocco for rest and sunshine. He found the art of Islam, and its patterns. Despite the stict concretism of these years, Rodhe often hints at association in his titles. Some of his paintings are called “Roof” and others “Rotor”; with the letter, he has thought partly of the fact that his word can be read both forward and backwards, partly of the purely graphic similarity between the word ROTOR and the forms of the pictures. The themes, the visual ideas, recur through Rodhe’s production, the various phases of which seem to stand in some subterranean relationship with each other.

Lennart Rodhe himself has described his method by quoting Georges Braque: “Let us forget the the things and consider only the connection, the relationship between them. When I set about painting, I feel that my painting is on the other side of the canvas, covered only by this white dust that is the canvas. It’s enough just to bring out the blue, another for the green or yellow; my painter’s brushes. When everything has been cleaned and tidied up, the picture is finished.”

Lennart Rodhe died in Stockholm in 2005.