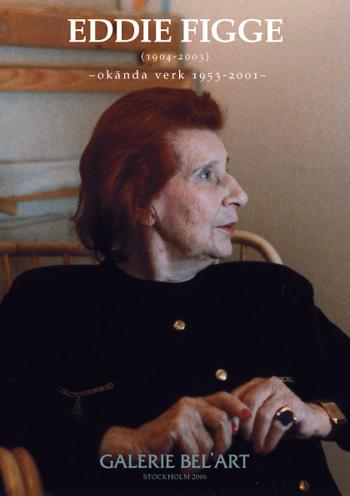 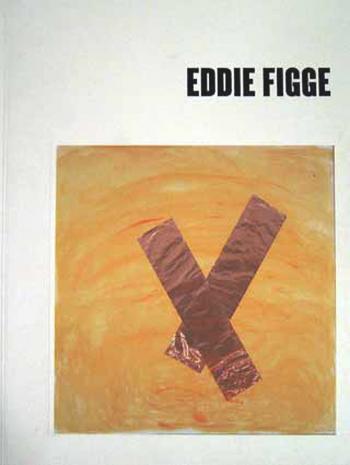 This biography is based on two important sources: an article by Kurt Bergengren in Obsi, 1953: “Eddie Figge”; and Mausel Eksell: “Eddie Figge”, paper presented for Professor Gunnar Berefelt’s seminar in advanced art history in the autumn of 1978 in the Department of Art History, Stockholm University. Quotations from these sources are indicated by the initials KB and ME, respectively.

1920    “She was sixteen years old and was sitting in a sand pile in the backyard on Katarinavägen, minding her little sisters. She was seated on a copy of Dagens Nyheter. Her eyes happened to fall on a column in which Ernst Rolf was advertising for a couple of girls for his revue ‘The Woman You Gave Me’, about to open at the Intima Theater. Until that moment Eddie had no ﬁrm plans for the future, but she borrowed her big sister’s coat and wide-brimmed hat and wedged her­self into the long line of girls outside the theater. ––– when Rolf ﬁnally showed up, he chose her.” (KB)

1923    “In the winter, she danced in the Norrland revues at the Södra Theater and also one season at the Folk Theater in Gothenburg. There she met her destiny for the immediate future in the form of  a German hotel manager, Paul Figge, of Hotel Kurhof Stephanie in Baden-Baden.” (KB)

1924    “She wanted to try to stay with the theater once more. After barely a year of married life she simply ran away from the role of pampered wife.” (KB)

1930    In Paris. “She associated mainly with the Dardels. Through Thora Dardel she was ‘sold’ in the El Garon night restaurant to Mme. Volterra, director of the Théatre Marigny at the Champs Elysées which was performing a revue. Eddie became its grande-mannequin.” (KB)
“Throughout the thirties Eddie crisscrossed Europe like a busy ant. She traveled alone and had plenty of time for reading. Dostoievsky, among others, was very popular.” (KB)
Her appearance at the Teatro Bernini in Rome was a ﬁasco. But Rome also offered the most powerful experience in her life up to that point. This was her encounter with Michelangelo—The Creation of Adam in the Sistine Chapel and the Pietà in Saint Peter’s. She could not believe being so taken with something! She wrote a poem in order to sort things out in her mind. For several years afterwards she read everything about Michelangelo that she could lay her hands on, and acquired all available reproductions of his art. Now she knew that another world existed—that of art, and felt that it was just waiting for her. Nevertheless, she brushed the thought aside.” (KB)

1932    “…she became Ernst Rolf’s star on his tours throughout Sweden. The Chat Noir in Oslo and Oscar Holst’s revue in Copenhagen are some notable stages…”(ME)

1939    She meets Roland Kempe in Paris who encourages her to become a painter. “From that day onward, Eddie Figge, now 35, cut her ties with the theater to devote herself exclusively to painting. She started drawing at Grande Chaumière, which was open for the public. There she met the Finnish artist Sam Vanni.”(ME)
“Acting on Thora Dardel’s advice she showed Otte Sköld her ﬁrst paintings in the autumn. The ﬁrst thing he asked for was ﬁgure studies, but she did not have any. ‘Then you’ll have to take drawing lessons here ﬁrst. Feel free to pursue me with drawings.’ She did. A couple of months later she started at the painting school, after a short period she became a free-place scholar, and after two years Otte Sköld found her ready to study on her own. (KB)
Her friends at the painting school included Ingeborg Björkvall, Lilian Levinson, Rune Jansson, Janne Lundgren and Bengt Garde.

1944    Marries Rune Jansson at the Cathedral in Stockholm on 5 April. The couple build a house close to Rune Jansson’s childhood home on Blidö. Figge participates in a group show at the Svensk-Franska gallery, whose owner Gösta Olsson wants to tie her to the gallery with a one-man show. Eddie Figge fears for her freedom and declines.

1945    The couple’s son, Sylvester, is born on November 24. Figge exhibits at the Blomqvist Gallery in Oslo. Edvard Munch’s friend and biographer, Rolf Stenersen, writes the introduction to the catalogue.

1947    The family travels to Paris and then on to Juan-les-Pins where they spend several months painting. Visits in Genua, Rome, Florence, and Normandie.

1953    Summer trip via Rome to Greece with visits in Athens and Crete.

1962    “The Critics’ Choice” organized by the Swedish Association for Fine Art. Ulf Linde selects Eddie Figge and Elis Eriksson. Travels to the United States with visits to New York and Cape Cod. Another trip to Greece.

1963    “Paintings in the Space Age”, exhibition at Galerie Burén in Stockholm with Space Room and “the letters”. “Modern Swedish Water­­­colours”, group show at the Brooklyn Museum of Art, New York. Exhi­­bition in Krognoshuset Aura, Lund.

1965    Trip to Central and south America in early spring, resulting in some paintings and a series of watercolors, Urubamba, shown at Galerie Burén in June-July. Rune Jansson breaks up from the marriage. Participates in the exhibition “Inner and Outer Space” at the Moderna Museet, Stockholm.

1966    Spends New Year in Rome where she writes her text about Atlan­tis—a “synopsis” of the painting she is to make later that year. The text is published in the December issue of Konstrevy.

1967    Exhibition at Galerie Burén comprising Atlantis. Publishes her poem Atlantis as a companion to the exhibition.

1969    Participates in “13 Colorists”, produced by The Swedish General Association of Fine Art and shown at the Academy of Fine Art in Stockholm. “Sketches—Poems”, an exhibition at the Archive Museum in Lund (now The Museum of Sketches).

1971    Figge retrospective at the Academy of Art in Stockhom in January. Eddie Figge and Maria Bergom-Larsson write the catalogue.

1972    UN Conference on the Human Environment in Stockholm. Figge addresses the delegates with the appeal “A New Era”.

1978    “Painting in the Space Age”, solo show at the Centre Culturel Suédois in Paris, texts by Eddie Figge and Lars Bergquist.

1981    Solo exhibition on the theme of space at the Moderna Museet, Stockholm with catalogue text by Olle Granath.

1985    Nordic group show and solo exhibition at The American Scandinavian Foundation in New York, celebrating the 75th anniversary of the organization. Visits New York and Pasadena.

1992    Seek Balance!, a new series shown at the National Museum of Art in Stockholm. Catalogue text by Olle Granath.